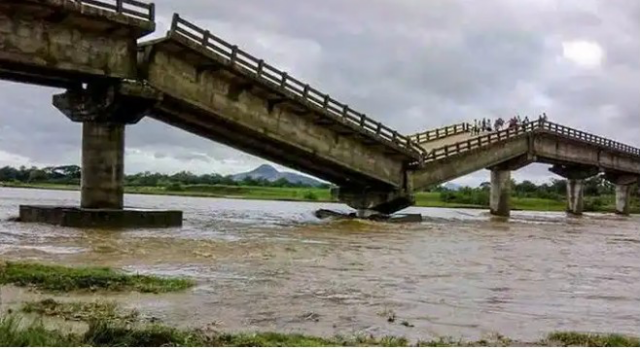 The dilapidated bridge on Bida-Minna Road has finally collapsed at Sagamio Farms, about 23 kilometres from Bida and 60 kilometres from Minna thereby cutting off the two major towns in Niger State.

LEADERSHIP gathered that the collapse of the bridge was as a result of the torrential rainfall across the state for the past five days.

It was learned that the water flowing under the bridge is one of the tributaries of River Niger that has overflowed its banks as a result of the rains.

Finding revealed that the rain has flooded most towns and villages along the banks and has destroyed the bridge turning it into a large chasm.

“The bridge collapsed totally on Sunday. Consequently, commuters plying the Minna-Bida Road are stranded as you can see,” a villager, Ismaila Abubakar said.

A commuter stranded on the road, Mohammed Aliyu told LEADERSHIP that “Most vehicles coming from the Ilorin-Mokwa-Jebba axis and Minna, unaware of the development, are now trapped at the spot. We have been here the whole day.”

Attempt to get Ministry of Works to speak on the development proved abortive, but a source said they are determined to find immediate solution.

It would be recalled that the contract for the road was earlier awarded by the state government for reconstruction but was listed among the roads to be reconstructed by the federal government through the NNPC Road infrastructures intervention scheme, however work on the road has stopped.