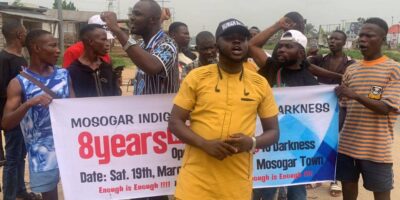 The DPO Mosogar CSP Bello engaged the protest group, giving security reasons why the protest should be aborted. He explained that the day and timing for the protest is wrong stating that an activity is ongoing in the town which attracted the CP Delta CP Ari to deploy several tactical teams to the town to instill law and order even as the said program is ongoing.

He noted that protest is the fundamental right of every citizen but when security reports are ignored the inevitable is bound to happen.

He opened up on the activity going on as a political declaration of one of the political big wig in the area who’s somehow complicit is the reason for the protest and agitation by the Mosogar people.

Describing that if the protest continues the whole process may be hijacked and supporters of the Politician who already feel agitated may attack which could lead to serious chaos resorting to a serious breakdown of law and order.

He went further to appeal that the protest should be aborted and be slated for another day.

Activist Umukoro who led the protest stated that as law-abiding citizens and a civil rights group, the group remains nonpolitical and would not be seen as one.

That the protest is not targeted at any individual or political party. He went further to appreciated the DPO for professionalism and accepted his appeal but requested that the press be briefed on the abortion of the protest exercise and the reason behind it which the DPO graciously agreed to.

He further stated that the restoration of electricity back to Mosogar town is sacrosanct and all hands must be on deck for that purpose.

He decried the total blackout stressing which have snowballed to eight years without power supply in the town.

In his word, we’re saddened by this occurrence and as a people, we can no longer seat while this goes out of hand
Severally the concerned citizens have taken to the streets in protest on their own. There’s a narration that they’ve contributed money in the time past almost amounting to Fifteen million naira for the light restoration which was allegedly handed over to Chief Sen Ighoyota Amori at the palace of the late king of Mosogar.

Several times they’ve protested they’ve been labeled and unlawfully arrested and it took my intervention to get them released.

Several of their agitations had even attracted the Governor’s attention multiple times. It is a known fact that the State government has graciously awarded this contract twice but for the complexity of the selected few Mosogar elites, the project remains non-attended to.

As a right group, we believe that collaborating with these citizens who are resolute to the restoration of light in the Mosogar community success must be attained.

We’re calling on Governor Sen Dr. Ifeanyi Arthur Okowa to as a matter of serious urgency put an eagle eye on the Mosogar light Project for timely restoration of light before his tenure run’s out.

Moreso there’s a need for the governor to sanction all those found complicit for the delay in the light restoration of both the contractor and individuals . We, therefore, wish to state that no matter the divide and rule strategy of this enemy of progress , we shall continuously protest and drag them to anti graft agency hence they can answer to their crime against the people of Mosogar community.

Conference for the actualization of Human Rights
Freedom from fear.