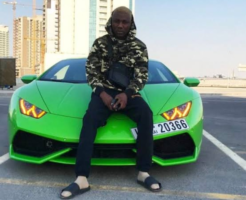 The death of Nigerian billionaire socialite based in Dubai, Dharmie Richie, has taken a turn as his mother stands accused.

According to a video of a family member of his, Dharmie did not die via depression or suicide as is being alleged.

According to the family member, who seemed very distressed, Dharmie was killed by his mother!

The family member alleged that Dharmie bought everything he owned in his mother’s name and the mother decided to get rid of him to take all the properties.

It’s also alleged that she killed his father in the same way, with blood coming out of his ears.

It was reported over the weekend that Richie Dharmie had died.

Richie, a billionaire Nigerian socialite based in Dubai, was reported to have passed away.

Some reports say he died from depression whilst others claimed he died after taking medication.

Either way, his family are now disputing those reports and shockingly blaming his mother!