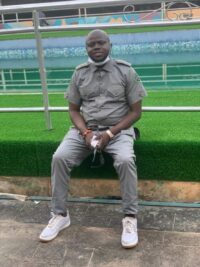 Distance is never a barrier in Activism.

UMUKORO EFEMENA KELLY Delta Rights activist and President UPU youth wing who doubles as Member Representing the National Youths council in the Delta State community Policing Committee has recovered the total sum of TWO HUNDRED AND FORTY THOUSAND Naira extorted from one Mr. Okafor Daniel a Deltan who just returned from Kenya but based in Lagos State by Police officers attached to OGOMBO POLICE DIVISION near Ajah axis in Lagos state.

According to Umukoro, he received the disturbing news from the depressed and suppressed Okafor Daniel after he was made to part ways with the said amount as against his wish

According to him, Okafor lamented that he was stopped in a commando-style around Sangotedo axis where they first requested for his phone on Daniel’s resistance to give them the phone they muscled him to instill fear and panic until he gave them the phone and his international work I’d after which they took him to the station

He wasn’t detained, No statement or any other form of interrogation was made rather they just threaten him and they extorted Mr. Okafor to the tune of two hundred and forty thousand.

According to him he withdrew the said amount from a ready POS merchant just opposite the station and was set free thereafter.

“This is coming just a year after the revolutionary Endsars protest
The DPO Ogombo police station Mr. John Amubieya seems to be an accomplice in the said matter with his involvement and reaction

The officers who were previously reluctant to release the money finally called back after I have made several calls to the police authorities in Lagos state and he requested account details to lodge the money into, as at yesterday they paid in 200,000naira via Pos transfer and promised to balance the 40,000 naira today. Graciously, the balance amount was paid today.

I must sincerely thank the The Area commander in charge of the Elemoro area command, he was of great help in the process of recovering the money. He is a sound officer who is against any more Intimidation or extortion.

Civility to members of the public is not negotiable 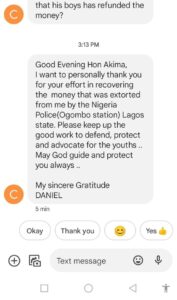