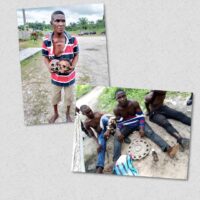 The Delta State Police Command has arrested a gang of three suspected ritualist and a native doctor in possession of two human skulls. 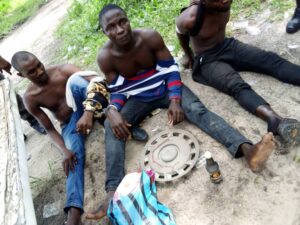 Focus Naija can report that the gang of ritualist were arrested at Nsukwa junction on their way to Kwale, the Ndokwa West headquarter while the native doctor was arrested in Ekpan Ovu where he exhumed the corpse of a 65-year-old woman that was buried in 2019 and detached the skull. 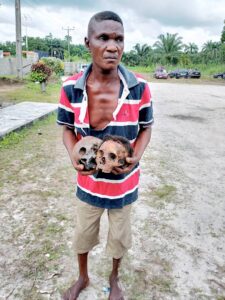 According to a press statement signed by the acting PPRO of the state command, DSP Edafe Bright; a stop and search revealed that the three suspected ritualist from Ebonyi State were in possession of a container containing fresh human blood on their way to the shrine of a yet to be identified native doctor in Kwale for ritual purposes and a rosary tied with charms was recovered from them.

On the other hand, the native doctor was apprehended by operatives attached to the Isiokolo Division after a relative of the deceased reported the incident of the exhumation to the police.

Another human skull was found in his possession and he confessed that he got it from an Osun State native doctor that is now late.

Read the statement below;

On the 24/6/2021 at about 1700hrs, one Ejiro Okoro ‘m’ 35yrs reported that his sister (Name withheld) aged 65yrs who died sometime in 2019 and was buried at Ekpan Ovu, that the corpse was exhumed by unknown person. On the strength of this report, the DPO Isiokolo Division swung into action, and detailed police detectives to investigate. During the course of investigation, information gathered through intelligence revealed that, it was one Godfrey Akpudje ‘m’ 60yrs who happens to be a native doctor that exhumed the corpse, and removed the skull, he was immediately arrested and two human skulls were recovered from him. He said he got one of the human skull from Osun state from a native doctor who is now late, investigation is ongoing.

2.On the 28/6/2021 at about 1145hrs, Dragon patrol team 31 while on stop and search duty at Nsukwa junction along Ogwashi-Uku/Kwale road intercepted a commuter sienna bus travelling from Asaba to Kwale, all passengers were asked to submit themselves for search, during the search three suspects were found with a container filled with Fresh human blood, the three suspects namely Monday Nwite ‘m’ 27yrs, Madabuchi Nweke ‘m’ 26yrs and Nwite Sunday ‘m’ 21yrs all of Ebenta village in Ohaukwu LGA, Ebonyi State were immediately arrested. During interrogation the suspects confessed to have murdered some unknown persons in Ebonyi State and were on their way with the murdered person’s blood to a native doctor whose identity is unknown for now but resides in Kwale. They were taking the blood to the said native doctor for rituals purposes. One rosary necklace tied with charms was also recovered from them . Investigation is ongoing.