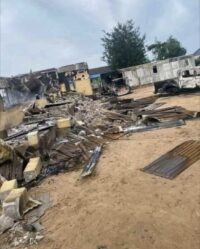 Armed men that are enemies of the community and that of the police numbering about twenty on Saturday night at 01:00hrs razed down the Ashaka Police Station in Ndokwa East, Local Government Area of Delta State. 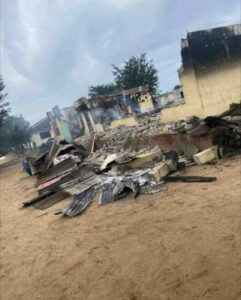 Focus Naija can report that the armed men threw IEDs, shot sporadically and set a patrol van bought by the community ablaze.

Confirming the attack in a press release dated 6th June, 2021, the acting PPRO of the  Delta State Police Command, DSP Bright Edafe disclosed that it is pertinent to state that no life was lost or arms stolen in the attack.

The press release reads in part;

In the early hours of today 6/6/21 at about 0100hours, some enemies of the community and that of the police all armed men numbering about twenty stormed Ashaka police station, they threw IEDS at the station, shot sporadically, and set the police station that was built by the community/DESOPADEC ablaze, and also burnt down one patrol vehicle also bought for the police division by good people of the community just to ensure that police presence is not felt. It is pertinent to state that no life was lost and no arm was taken away. However, the police will not relent in ensuring that law and order is maintained in any community. Unprovoked attacks on the police will not deter the police from providing the needed security in any community in Delta state. The hoodlums who perpetrated this dastardly act will certainly not go free, as serious efforts are on to arrest them and bring them to book.

adsense
Related Topics:
Up Next