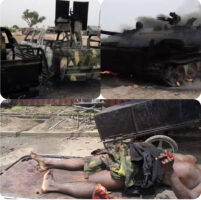 The insurgents reportedly disguised as friendly troops to enter the fortified headquarters of the powerful 156 Task Force Battalion in Mainok.

breached a crucial military base in Borno, killing a commander and at least thirty soldiers.

Information shared to journalists by military sources said the insurgents disguised as friendly troops to enter the fortified headquarters of the powerful 156 Task Force Battalion in Mainok.

Military sources said the timing of the attack raised suspicions that internal military activities, especially communication signals, might have been leaked to the insurgents.

A military spokesman did not immediately return a request seeking comments about the attack, which was still reportedly ongoing as of late Sunday.

Crucial military hardware was also targeted and destroyed by the terrorists in yet another devastating development for Nigerian forces who have been on the frontlines against the dreaded sect since 2009.

At least 50 troops have reportedly abandoned the battalion to another military location nearby, with more feared to be lost in the bush.

The battalion’s commander was a lieutenant-colonel and his identity has been withheld by Peoples Gazette until proper notification of his family by the military.

The attack came as Nigerian forces were striving to dislodge the terrorists from Geidam, a large town in the neighbouring Yobe that was overrun last week.

The new army chief Ibrahim Attahiru had vowed to take the fight to the insurgents and ordered the bombing of their hideouts in recent weeks to prevent attacks and end the decades-long campaign.

“Military Are On Strict Orders To Enforce Curfew” – Anambra Government On Igbariam, Others

Ignore Fake News!!! Imo State House Of Assembly Is Not On Fire