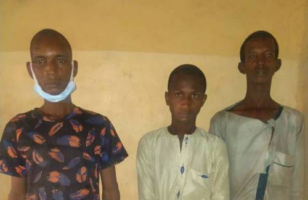 The Security Operatives in Ogun state have arrested three Fulani herdsmen for burning several houses and injuring some residents of Ayetoro area of Ogun State.

According to the police, a gun and “a bloodstained cutlass” was recovered from the herdsmen after they were arrested on Saturday.

The herdsmen are identified as Musa Yusuf, Usman Mohammed, and Aliyu Abubakar.

While reporting, SaharaReporters learnt that they Injured resident identified as Ismaila Alabi with deep matchet cut.

Rochas Okorocha Has Been Released From Police Custody – Imo Police