As hefty of the allegations of penetration and defilement of their 9-month-old son by the father, Chukwutem Victor Inalu, many reactions that suggested that he might not be gay have trailed the controversy after he released a statement with screenshots to tackle the allegations online.

According to monitored comments made by social media users, the action doesn’t signify that the father is gay for no man in his right senses would be sexually attracted to his own boy child if it’s not for diabolical reasons.

You’re very correct but I don’t think a man in his right senses would be sexually attracted to his own child come be boy child. That’s not gayism,if it’s possible then it’s ritual or diabolical, Ezenwa Ikenna wrote.

Following shortly was a similar comment made by an acquaintance of the man who revealed that as undergraduate students of the University of PortHarcourt as they then were, he usually kept steady girlfriends on campus.

Am surprised 😮 cos all our years in uniport you always have steady girlfriends so I don’t understand what’s going on here. 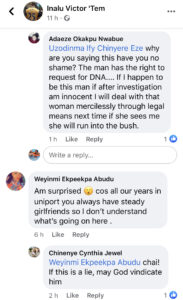 However, there are increased calls for Chukwutem Victor Inalu to conduct a comprehensive medical examination at a neutral and responsible hospital over the weighty allegations.

Your wife has made very serious allegations against you.

Sentiments and emotions are against you right now and this alone can’t vindicate you. The court of social media has sentenced you already.

You need to man up and defend yourself with facts, hard cold facts.

An innocent person dares all odds and would do anything to prove their innocence.

Only one thing can vindicate you and that’s a COMPREHENSIVE MEDICAL EXAMINATION CARRIED OUT ON YOUR CHILD BY A NEUTRAL AND RESPONSIBLE HOSPITAL.

If your wife is lying, then she is not a mother, bringing an innocent child into whatever issues she has with you is despicable.

If you are indeed guilty, shame on you, you may get away with this but trust me, you will be caught in the least manner you expect. 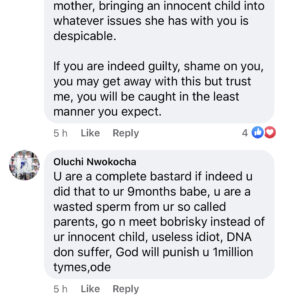