A lady who ate the scrotum of a burnt policeman in Ibadan has been arrested.

See her in the picture below. She is well known as Iya Oba. 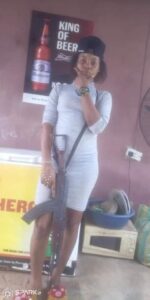 In the early hours of Saturday, 7th November, 2020, around 2am in the midnight, men of the Nigeria Police traced her to her husband’s house. They tarried a while, till the dawn broke. When it was around 5am, the police moved in and arrested her with her husband. With her husband, she was whisked away.

“Who is this woman”, you may wish to inquire. Her name is Iya Oba. Her full name is still unknown. She is a pregnant mother of one (less than two year). She is a young lady in the mid-thirties. It is believed that she is in her second marriage. She lives around Alawaye Mosque, Abayomi Area, Iwo Road, Ibadan, Oyo State.

On the third day, after the arrest, her husband was released, as he was not implicated in the horrendous act. However, his wife (the accused) was kept in the police custody. She will face the music in the hands of the security operatives. After diligent investigation, she will be prosecuted.

Iya Oba was one of the EndSARS protesters in Ibadan. During the protest, they unleashed terror on innocent citizens. They wreaked havoc on people’s sources livelihood. As if that was not enough; they went further to lay siege on police stations. Policemen were hacked down, killed, burnt, roasted, butchered and eaten.

The most awful part of the whole act was what this woman did. While those criminals were slicing the roasted policemen into pieces, some went away with the heads; some left with their chopped-off hands and others went with sundry parts.

Iya Oba went bizarre. She aimed at the scrotum of one of the policemen; cut it off and ate it! She didn’t do it in the dark. This happened in the presence of many people, as reported. A pregnant woman, in the name of protest, ate the roasted scrotum of a fellow human being. God!

Thank God; she has been arrested. I hope Governor Seyi Makinde will allow the Police to do their work without interference. God bless Oyo State.