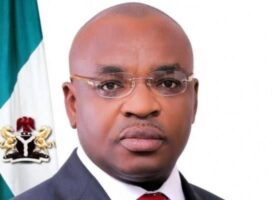 The Trial of Gov Udom Emmanuel by EFCC.

Akwa Ibom Chapter of APC is pleased to note that the EFCC is relentless in its trial of Gov Udom Emmanuel and some of the state government’s officials in the money laundering case it filed in 2018 against them.

Although the governor enjoys immunity from prosecution, he was duly indicted for the crime of money laundering in December 2018, the first and so far the only, sitting governor to be so indicted in Nigeria. As the trial progresses, the governor’s name continues to be mentioned in court before justice Rilwan Aikawa of the Federal High Court Lagos, for his ignoble role in this crime. Last Thursday, November 12, the case came up again in the Federal Hight Court, Lagos, and the proceedings were well reported in national newspapers.

We applaud the EFCC for pursuing this case with vigour and rigour; and for refusing to be compromised. The crux of the matter as filed by the EFCC before Hon. Justice Rilwan Aikawa is that Gov. Udom Emmanuel spent N1.4 billion belonging to Akwa Ibom State government to pay lawyers, all of them Senior Advocates led by Mr Paul Usoro, SAN, who defended him at the election petition tribunal in 2015 where his victory was being challenged by our own governorship candidate, Mr Umana Okon Umana. Other officials indicted with the governor who are also standing trial are the State Commissioner for Finance, Mr Nsikan Linus Nkan; Director in the Accountant General’s Office, Mr Mfon Udoma; a cashier at Akwa Ibom State Government House, Ms Margaret Ukpe and the State Commissioner for Justice & Attorney General, Mr Uwemedimoh Nwoko, SAN. The immediate past NBA President, Mr Paul Usoro is also a defendant in the case for he was Udom Emmanuel’s lawyer during the tribunal sitting, he was the one who paid other senior Advocates from the said N1.4 billion.

While the cashier and the other officials of the state government are being charged for their roles in transferring the money (N1.4 billion) from the coffers of the state government to Paul Usoro’s personal account in Access Bank, Nwoko is indicted for receiving N55 million, part of the N1.4 billion payment, from Paul Usoro. The Court will have to decide if this was a kickback to Nwoko.

We are particularly interested in this case for two reasons. First, we believe that we were robbed of victory during the elections and at the Supreme Court during the post-election litigation. We recall that the Tribunal had cancelled the governorship election in the 18 LGAs in the state and ordered a rerun in those LGAs. The Court of Appeal to which the tribunal judgment was appealed by both the APC and PDP in cross appeals totally cancelled the election in the whole state and ordered for another governorship election to be conducted by INEC. But in the night of February 03, 2016, the Supreme Court in a rather strange manner entered judgment in favour of Udom Emmanuel. The reverberations of that debauchery are still being felt till today. Our state has not recovered from it.

The second reason we are keenly following this matter is that it speaks to the issue of corruption and abuse of office in Akwa Ibom State. Mr Udom Emmanuel has no right to pay his private lawyers from the government’s purse. It is tantamount to corruption which has been a major source of underdevelopment in the state, especially under this administration. The authorities should therefore look into the several cases of abandoned projects under this administration and determine if monies were paid for jobs not done.

Additionally, we urge the EFCC to prosecute the money laundering case very diligently and bring it to logical conclusion in the interest of justice for the long suffering people of Akwa Ibom people who have been denied the benefits of good governance and basic amenities due to pervasive corruption in the state.