ABUJA_____Aggrieved Presidential Amnesty Leaders at the weekend called on the National security Adviser, stakeholders to address the problems and challenges the Amnesty leaders and their boys are facing. They also advice the new Coordinator, Presidential Amnesty Programme, PAP, Colonel Miland Dikio (retd.) to learn from the pitfalls of his predecessors. 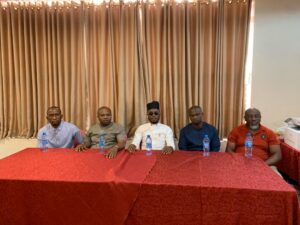 In a press conference held today in Abuja, Mr. Marvin K. Thompson aka MMMBOSS, Mr. Otonyemiebai Kuna aka OBES, others are Mr. Shadrack Gogo Eferebo aka AWOL, Mr. Victor Jacob aka Authentic Terin and Mr. Tonye Iyalla aka ELDER said, “it is so unfortunate that those of us who are the foot soldiers and commanders have never been treated fairly or adequately carried along. As we do this Press Conference, most of our boys have not been trained or deployed to schools, rather attention is concentrated on few leaders and persons who claim to own the program more than others, forgetting that we the field commanders are the people that sacrificed our lives and those of our family members and beloved ones in the process.

Distinguished Gentlemen of the Press and all great men and women of Goodwill.

Our situation has gotten to a suffocating level such that we can no longer continue to die in silence, hence our resolve to break the deafening graveyard silence that does not symbolize the prevalence of justice, peace and equity.

We wish to state categorically that whatever relative peace been enjoyed in the Niger Delta region that has helped to maximum crude oil and gas production is due to our unrewarded sacrifices.

We wish to place on record once again that we were never enticed or cajoled by the Federal Government with the paltry Sixty Five Thousand Naira stipend to accept the Amnesty, rather we wanted restoration of Peace to our then very volatile region. We also wanted to see how our youths and people could explore opportunities in the Presidential Amnesty Programme which came into effect with the Presidential Amnesty Proclamation by late President Umaru Musa Yar’Adua on the 25th Day of June, 2009.

So far, we can make bold to attest to the fact that despite the inherent flaws in the implementation of the program, it has also created so much positive impacts especially in the area of education and skills acquisition training.

However, it is so unfortunate that those of us who are the foot soldiers and commanders have never been treated fairly or adequately carried along. As we do this Press Conference, most of our boys have not been trained or deployed to schools, rather attention is concentrated on few leaders and persons who claim to own the program more than others, forgetting that we the field commanders are the people that sacrificed our lives and those of our family members and beloved ones in the process.

Successive Coordinators and leaderships committed big blunders by neglecting the field commanders hoping they were enjoying some special protections by persons who deceived and collected so much money and jobs from them, only to find out when it was too late, that the field commanders and the foot soldiers are the original owners of the program and they are the only persons whose cries and voices could be heard, loud and clear whenever things go wrong.

Presently, it has come to our notice that our father and leader; Col. Milland Dixon Dikio, the new Sole Administrator is towing the same very dangerous path. Due to the advise of some deceptive elements around him, he has vehemently refused to attend to those of us who are the field commanders and original email of the program.

Our resolve to stop the Tradition of pulling down our Leaders has necessitated this Press Conference which is aimed at calling the attention of Col. Milland Dixon Dikio and the appointing Authority to the grave danger the continuous neglect of the original owners of this program will likely cause. We say the above because, our boys are already very unhappy with their ill-treatments.

Beside the unhealthy practice of cutting their monthly stipends, they have also been denied education and trainings opportunities which were our basic reasons for accepting the Presidential Amnesty offer.

We wish to humbly appeal to Col. Milland Dixon Dikio and all those responsible for the day to day running of the PAP to give these issues we have raised serious attention to avoid unpleasant consequences. We say the above because there is a limit and level we can restraint our very angry followers.

We want this program to succeed and that is the reasons we have tolerated a lot of the irregularities and abnormalities for eleven years.

We thank you members of the Press, the fourth estate of the realm, mouthpiece and hope of the voiceless and oppressed majority for remaining as the worthy symbol of the common people in our cities, towns and villages.

Thank you so much and God bless you all.