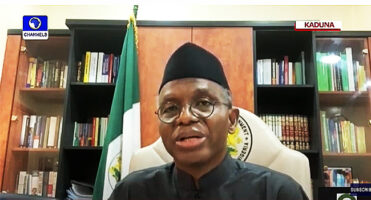 Governor Nasir El-Rufai of Kaduna state has lamented that Nigeria is not collecting as much public revenue as it can. He says that there is still much potential for growing Value Added Tax (VAT) and independent revenues of the Federal Government than what is being collected presently.

El-Rufai made this assertion in a keynote address he delivered at the 22nd Annual Tax Conference of the Chartered Institute of Taxation of Nigeria (CITN), held in Lagos on Thursday, with the theme: ” Taxation and Economic Competitiveness: Imperatives for National Development – a Nigerian Subnational Perspective”.

The governor who noted that there is considerable resistance to the hike in VAT from 5 percent to 7.5 percent, says Nigeria’s rates are still much lower than other neighboring countries.

This low rate of internal revenue collection according to him, depresses public finances, hampers the ability to deliver social goods, services and physical infrastructure. In addition, he opines that the low IGR in turn limits competitiveness, shrinking the ability to promote the sort of enabling environment and economic dynamism that can create jobs, expand public revenues and improve public welfare.

“With national tax revenues (oil and non-oil) still less than 7 percent of GDP, Nigeria is way behind the average of comparator nations of about 20% of GDP. As the world goes green, and crude oil loses its primacy as a leading source of energy, Nigeria must look inwards and compel every adult to pay tax as part of our citizenship obligation.

“In light of the situation that we are, we have very few options other than develop our capacity to collect to broaden the tax net, assess and collect taxes from individuals and companies to levels of our comparator nations – at least 20% of GDP within the shortest possible timeframe. As political leaders and tax professionals, we must put our collective heads together to ensure this national objective is achieved as soon as possible”.

The Kaduna state Governor also said that only a minority of Nigerians pay income tax, especially those whose taxes are deducted at source – including the formal sector employees, public servants and the like, lamenting that Voluntary compliance with the obligation to pay income tax remains a major challenge in the country.

He listed Lagos and Edo as having done relatively well in terms of tax revenue mobilization at the subnational level, stating that the overall picture is even less encouraging than at the national level.

“The total internally generated revenues by states are currently less than one percent of GDP, despite the fact that Nigeria’s current fiscal federalism framework allows states (and local governments) to collect many taxes, levies and fees as in the Taxes and Levies (Approved List for Collection) Act, LFN CAP T02.

“We were determined from 2015 to assess and collect enough tax revenues to cover at least our personnel costs, and in the medium term, our entire recurrent budget such that we don’t need to wait for the monthly FAAC ‘handouts’ to keep our governmental operations running.

“To underscore our commitment to this, the then Deputy Governor and I resolved to donate 50 percent of our salaries and allowances to the state treasury until we are able to achieve the first benchmark.We did so in 2019!”

El-Rufai, however, stressed the need for tax design in a developing country such as Nigeria to consider supportive strong institutions, particularly by government building fiscal capacity across its economic and political institutions. .

“The pace of national development, especially in developing and emerging economies such as Africa critically depends on the role government plays in providing both the traditional services that are her exclusive reserve such as law and order, defense, etc. and non-traditional services such as justifiable economic and social interventions in infrastructure, education and basic healthcare. Recent literature and country experiences suggest that ‘developmental states’ – that often intervene significantly in social and economic sectors – are better able to achieve faster economic growth and diversification than the regulatory states promoted by the now-discredited Washington Consensus which pushed for lesser government involvement in the economic arena.

“From the foregoing, it is clear that four key points have emerged as the guiding principles for achieving development with taxation:

“Performance-based budgeting to enhance efficiency and effectiveness in the utilization of government revenues;

“Prioritizing expenditure to intervene in sectors that accelerate national economic growth and performance;

“Competitiveness is determined by an environment that promotes investment and innovation by businesses, which enables them to compete globally and in return attract investment from international companies.

“It is therefore obvious that many factors besides tax policy determine where a company locates its investment.

“These factors include availability of strong institutions, product/service markets, good infrastructure, educated and skilled labor and a robust financial system, amongst many others.

“Organizations appear to be more competitive when the tax burden on them is reduced. The reduction of the corporate tax rate from 30% to 20% and 0% for companies with turnover of N100M and N25m, respectively, was expected to boost the competitiveness of Nigeria’s economy.

This incentive is expected to encourage businesses to innovate, expand their productive base, increase employment of skilled and unskilled labour, improve supply chain efficiencies, and attract foreign direct investment.

“Tax policy is one of the veritable tools available to countries to improve and promote national competitiveness. No wonder in recent times, many countries have focused on reducing their corporate income taxes in order to attract investment and businesses, and create jobs and wider tax net.

“What We are Doing about Tax in Kaduna State:

“There has been steady rise in revenue collection in Kaduna State within the last four years. We have increased our revenues from N23bn in 2016 to N44.9b in 2019, an increase of N21.9bn.

“To appreciate this journey, it is important to recall that revenue collection in 2015 was N13.55bn. Our government had nearly doubled this by 2017, prior to the great leap forward in 2019, all this without hiking tax rates.

“This achievement was made possible through the deliberate implementation of a carefully designed plan. The main focus has been on critical reforms, broadening the tax net and automation of processes to support our ease of doing business charter.

“One of such reforms was the enactment of the Kaduna State Tax (Codification and Consolidation) Law in 2016.

“The law established the Kaduna State Internal Revenue Service (KADIRS), in place of the defunct Kaduna State Board of Internal Revenue (KDBIR), in order to holistically turn around the institution into a more efficient, service delivery agency, with a private sector, business-like orientation.

“The main thrust of the law is to eliminate multiple taxation, provide a clearer understanding of taxes and reduce the cost of compliance.

“Other important features of the Tax Code include the following:

“Empowering KADIRS as the sole revenue collection agency in the State
Prohibiting cash collection which helped to block revenue leakages.

“Providing multiple payment channels to ease compliance encumbrances.
Reducing the number of levies, fees and other charges, especially at the local government level.

“To implement the provisions of the law effectively, the organisation had to be restructured. KADIRS has a flat structure, with functions-based departments, for easier co-ordination and synergy. We have prioritised the expansion of the tax net to increase the number of taxpayers and potential taxpayers, and we are scaling up advocacy and public private dialogue”.

“From 2015, we reformed or created new institutions to anchor the execution of our governance agenda. Amongst other measures, we enacted legislation to establish a new revenue agency, and a new body to digitize the land registry and to manage land administration in the state.

“We created a one-stop shop for investors and passed laws to reform the management of public finances, including a Fiscal Responsibility Commission. We enacted a Contributory Pension Law and made the scheme effective from 1st January 2017. This mix of legislation and new agencies provide the platform for a coherent approach to supporting private investment and business growth.

“Within the limited scope of the taxing powers available to a sub-national government, the Kaduna State Government supports new business start-ups and investors with tax holidays to help them set up and stabilize. We waive some of the taxes, levies and fees payable to the state government to make our state more attractive to investors”.

JUST IN: Policemen Seen Flogging Driver With A Machete In Imo (Video)

WATCH: Moment Omoyele Sowore Was Shot Captured In A Video

BREAKING: Omoyele Sowore Has Been Reportedly Shot In Abuja (Photos)

WATCH: Moment Omoyele Sowore Was Shot Captured In A Video