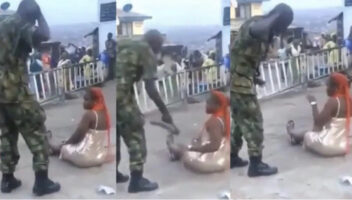 Some men of the Nigerian Army who were recently captured in some viral videos flogging a young lady and shaving the hair of some residents of Ibadan, Oyo State have been arrested.

Oyo state Commissioner for Youths and Sports, Seun Fakorede made this known through his official Twitter page.

The incident which reportedly occurred in the Beere area of Ibadan on Sunday, 1st November, 2020 showed a soldier flogging a lady for allegedly dressing indecently. Some male residents also had their hairs shaved.

Following public outcry and condemnation of the act, the said military men have been arrested and taken to the barracks.

Is there an offense in Making Colored Hair. What has she done that will make a soldier flog a lady like this. @seyiamakinde @falzthebahdguy @davido … The name of the soldier is O. ADESINA .. THIS HAPPENED IN IBADAN YESTERDAY pic.twitter.com/rz1Rhlw1c1

Seun Fakorede tweeted, “My ears are full with news of the unlawful activities of some Soldiers of the Nigerian Army, over the weekend.

“I have immediately reached out to the Commandant of the Operation Burst and I’ve been assured that the men involved in this distasteful operation have been arrested and taken to the barracks — they will be dealt with accordingly. This will not repeat itself again in Oyo State. Please, kindly go about your daily business and activities without fear. Thank you.”

“Oyo State Security outfit, Operation Burst has admitted the video that went viral at the weekend in which one officer Adesina who was seen assaulting a lady at Beere, in Ibadan.

“The Commander of the team, Captain Usolo who admitted the allegations,…apologised to the families of those assaulted by the erring officers.

The Commander also noted that Adesina who assaulted a lady and other erratic officers have been arrested and detained.”

See What The Lady Wrote A Month Before She Was Killed By A Stray Bullet In Oyigbo, Rivers State