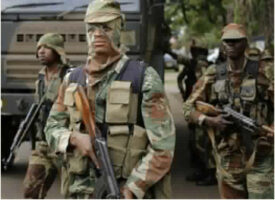 Reports coming out from the ongoing military operation in Oyigbo, Oyigbo Local Government area of Rivers State indicate that there is serious humanitarian crisis due to lack of access to food, Medicare and other basic amenities for residents who have been shut in by the 24 hours curfew declared over the area since last Wednesday.

Most affected by the deprivations, according sources from the communities in Oyigbo, are women, pregnant women, children and the elderly.

The woes of the residents who were caught unawares by the sudden imposition of the curfew have been compounded by closure of major markets, pharmacies and hospitals.

While all the banks in the area are not operating, most operators of POS in the area have also ran out of cash. The very few POS operators still in operation do so secretly and charge as much as 20 percent and above as commission, it was gathered.

However sources also said that the military has been making “terrible discoveries in some hideouts with terrible names like ‘Waji Down Below,’ ‘kom-kom,’ ‘Mbano camp,’ and ‘Obeama.’

“Some of the looted items were recovered there. A number of arrests were made. But you cannot rule out intimidation and harassment of innocent residents when there is military engagement.

“The military aerial survey with Air force jets yesterday in Oyigbo sent jitters down their spines. I think they will be more scared tomorrow, (Saturday) because I learnt from military sources that there is going to be military show of force in Oyigbo,” said the source.

However, the sources who spoke to PM NEWS from Oyigbo, lamented the increasing hunger in the area as many of the residents have exhausted their stock of food.

They therefore advocated that humanitarian organizations like Rotary, Red Cross and National Emergency Management Agencies, NEMA and others should be allowed into Oyigbo to provide succor for the people.

They also appealed to Governor Nyesom Wike to relax the 24 hours curfew and allow residents to open the markets and shops for residents to have access to food and medicare.

The ongoing military launched following the events of Wednesday October 21 when hoodlums suspected to be members of the outlawed Indigenous People of Biafra, IPOB, invaded Oyigbo and went on destruction and killing spree of security operatives and their outposts.

They also allegedly burnt over 50 private and public vehicles, including an Armored Personnel Carrier, a State High Court building among others.

Meanwhile, the Public Relations Officer for 6 Division of the Nigerian Army, Major Charles Ekeocha has insisted that the ongoing operation was not designed to inconvenience residents of Oyigbo.

“We are there to carry out operation to recover weapons carted away from our soldiers who were killed so that the criminals will not use the guns to kill innocent citizens in Rivers and outside the State. We carrying out our search professionally, said Ekeocha.