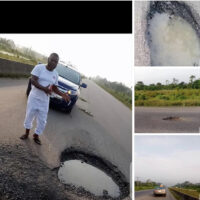 Senior Special Assistant to the Delta State Governor, Rex Anighoro survived a lone accident after his vehicle ran into a killer pothole along Elibradu road near Emuoha in Rivers State.

Sharing photos of the potholes that took two tyres from his vehicle, Rex Anighoro who is Governor Okowa’s SSA on civic engagement and civil society disclosed that five other vehicles ran into the same pothole and upon enquiry, many have experienced similar fate at that spot.

“At a Village called Elibradu near Emuoha in Rivers State, God saved us from a Killer Pothole, Infact it was a deep well.

“We lost two tires immediately but our Angels were on duty.

“We saw other five Cars running into the same Pothole and also heard very sad stories about the Pothole, It is sad that despite all that has been happening at that spot it has been left unattended to, pleeeasssee something should be done ASAP. Someone from that community should help us all, abeg! I wish I could do something there.

We thank God for his infinite mercies, THE HAND OF GOD HAS RESTRAINED THE ROD OF THE WICKED!

I AM DESTINED TO WIN! 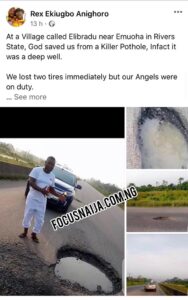