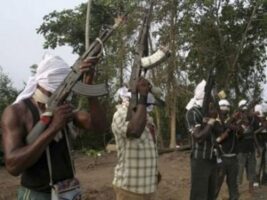 There is currently heavy tension in Ebonyi state following the destruction of lives and property across the state by hoodlums in guise of endsars protesters, as the capital city, Abakaliki has continued to witness more sporadic shooting across different streets, putting residents into great fear as they scampered for safety.

Correspondents monitoring the development reports that around 10am Tuesday after the havoc of Monday, another round of shooting in different parts of the metropolis had continued, causing markets to close and shop owners winded abruptly.

Major areas like Vanco,Ogoja road and Onuebonyi were danger zones, as gunshots were fired sporadically in the air and tear gas thrown to disperse hoodlums.
Banks also closed their customers outside while Police and other security agents were seen positioned in some strategic points.

Yesterday, tension heightened in Ebonyi following an attack, Monday afternoon by suspected hoodlums who again threw the state into war theatre, leading to setting ablaze the Central Police Station, CPS located at Onuebonyi axis of the capital city and destruction of valuables.

Newsmen gathered that the suspected hoodlums at early hours of the day burnt down a filling station in Ikwo local government area of the state.

This, as reliably gathered by our reporters is connected with an allegation of un-shared palliative materials by the Council to the indigents of the Council, leading to hostility that rocked the area and other parts of the state.

The angry protesters were said to have been aggrieved following non-distribution of the palliatives as they were seen moving from one location to the other to register their displeasure.

Reliable source, a staff of the Alex-Ekwueme Federal University, Ndufu-Alike Ikwo informed that people scampered out of the University vicinity with panic and trembling as those with cars zoomed out through the University’s gate for fear of being attacked by the angry hoodlums.

“We got information that Ikwo youth were surging towards the Institution so, we hurriedly left the University.

“Most of us with cars are now on convoy racing towards Abakaliki. We met two road blocks.

“We were in the hall preparing for a training when the information came. While we were there in the Hall, somebody said we should leave, leave, leave.

“Only God will save us in this country. The angry youth were seen with cutlasses having their faces covered”, he unfolded.

Recall, that the state governor placed Curfew from 8:pm to 8: am following the crisis that is rocking the state.

Governor Umahi had on Sunday night during press briefing assured Ebonyians that there would be no more cause to panic in the state, adding that he had directed the boys to secure the area.

Photos As Policemen Take Over Afrika Shrine To Restrict Movement

Shopping Complex In Abuja Being Demolished With People Inside (Video)

Photos As Policemen Take Over Afrika Shrine To Restrict Movement