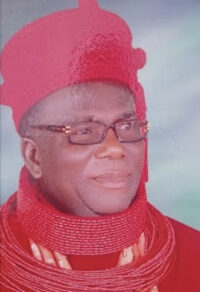 The Ovie of Uvwie Kingdom, HRM Dr Emmanuel Sideso (JP) OON, Abe 1, has suspended the Chief Priest of Owhoru Deity in Ekpan, Robinson Adereyo for six months for allegedly flouting the directive of the Ovie of Uvwie – in- Council to suspend all cultural festivals in Uvwie Local Government Area pending when the spread of the COVID – 19 pandemic is curtailed. Ndokwa Vanguard reports

The traditional ruler suspended the chief priest yeaterday at a meeting in his palace in Efurun with the Executive Chairman of Uvwie Local Government Council, Hon Ramson Onoyake, the Unuevworo (traditional mouth piece) of Etche R’ Ekpan (traditional administrative unit), Chief Peter Ifie and some Uvwie chiefs in Ekpan.

Also present at the meeting were the Unuevworo of Alegbo, DPO, Ekpan Police Station and other heads of government security agencies in Uvwie Local Government Area.

Abe 1 who directed that the next priest in seniority should act during the period of the suspension, also directed that Hon Onoyake should carryout COVID-19 test for the suspended chief priest and his disciples who celebrated the Owhoru cultural festival last weekend.

He further said that the Unuevworo of Ekpan would be issued a warning letter for failing to stop the celebration of the cultural festival.

While stressing that the decision of the Ovie-In-Council stands, he recalled that Christians did not celebrate Easter because of the outbreak of COVID-19 and that Muslim made a similar sacrifice during their festival celebration.

He therefore urged residents of the local government area to abide by all Nigeria Centre For Disease Control (NCDC)’s directives aimed at stopping the spread of the disease.

Speaking to newsmen shortly after the meeting, the Uvwie Local Government Council boss, Hon Onoyake applauded the traditional ruler for the decision and emphasized that the COVID-19 was real.