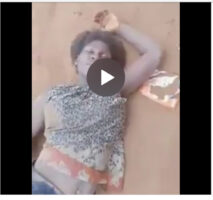 A recorded video of a yet to be identified  slay queen reportedly dumped and captured continuously scratching her private part in the Sapele road area of Benin City is currently going viral online.

Unable to respond to questions of enquiries about her identity or what happened to her, the voice over narrated how the lady was found rolling on the ground while continuously scratching her private part, an act that could not be explained but suspected to have been used for rituals.

She kept demonstrating as others joined to watch her and make comments as she visibly struggled in discomfort from whatever it is that’s troubling her.

See the video below or click here to watch;

Related Topics:Recorded Video Of Slay Queen Captured Rolling On The Ground And Scratching Her Private Part Continuously
Up Next