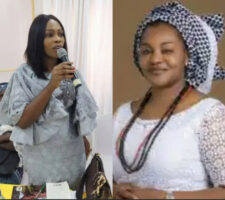 A serous physical fight reportedly erupted between two prominent female commissioners under Governor Abdulrahaman Abdulrazaq few days back over secret handling , diversion and mismanagements of local government fund by some blocks within the government which did not favour one of the commissioners, a top government sources has revealed to this medium .

The two female commissioners involved are listed as commissioner for finance , Mrs Florence Oyeyemi Olasunbo and her counterpart from the Local government and chieftaincy affairs, Hajia Aisha Ahman-Pategi .

According to the source , trouble started when Aisha Ahaman Pategi found out that over three hundred million naira cash belonging to local governments was secretly kept by the commissioner for finance , Mrs Olasunbo for an undisclosed reasons .

She was said to also be amazed at the rate of borrowing by her ministry to augment staff salaries every month. This informed her to launch personal investigation to banks about the actual funds coming to the local government and how the funds are being handle by the ministry of finance

The investigation embarked upon by Aisha Pategi revealed that certain fund amounting to over three hundred million naira was secretly withdrawn from bank and kept away without her office knowing. Infuriated by this, the commissioner decided to expose all her findings at the meetings which is going to be attended by all DPMs from the sixteen local government areas

However , some people loyal to Commissioner for finance had already tipped her of Aisha Pategi mission in bank and how the banks had released some vital documents to the commissioner for local government in order to nail her during JAAC meetings which was slated for the next day

Unknown to Aishat Pategi that the Finance commissioner is already aware of her mission to Bank and how she now have information about the secret fund kept in ministry of finance, she was prepared to expose Mrs Olasumbo at the JAAC meetings with all the banks documents and revelations in her possession.

But Mrs Olasunbo in a strategic bid to neutralize all plans brought by Aihshat Pategi to the meetings smarty made announcement of the stash fund belonging to local government which were kept in an undisclosed destination to the meetings before the latter could make her presentations .

Mrs Aishat Pategi angrily rose up in confrontation with Mrs Olasunbo and demanded to know why she was told to apply for bank loans to augment staff salaries when such volume of fund were kept without her awareness in the first place.

Mrs Olasunbo who could not stand such hot debate attempted to walk out when Aisha Pategi drew her clothes and rained heavy blows on her before some men quickly made their ways between them and walked the finance commissioner out of the hall .

Following these brawls between the two ladies , the Director of Personnel Management of LGs quickly met and came up with a resolution to demand immediate implementations of NFIU regulations in administration of council fund but their resolutions was turned down by Governor Abdulrahaman Abdulrazaq who insisted the state government should be responsible for management of the fund of the local governments .

The Governor had summoned meetings of all the DPMs immediately and compel them to reverse their resolution in favour of the state government.

About five DPM may be facing suspension in few days time because of their stand against the Governor’s directives which oughtriggtly negate the code spelt out by NFIU for management if local government fund.

Meanwhile, governor Abdulrahaman Abdulrazaq efforts to reconcile the two female commissioners did not work out well as Aisha Ahaman Pategi insisted the finance commissioner must be explain why she was not carried along in financial matters that has to do with her office or the governor redeploy her to other ministry .