Three students of the Benue State University were killed yesterday at the University of Agriculture in Benue state, after been caught with fire arms at the school gate.

They were apprehended and handed over to the community before jungle justice had its way. This incident happened following the reported death of a student in the Benue state university a day before. 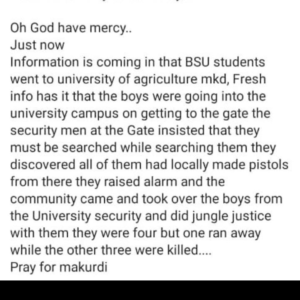 During his visit to the scene of the jungle justice, the institution’s VC ordered the remains of the deceased BSU students to be evacuated while assuring maximum security for students that are willing to remain in school. He also gave students the permission to travel home until the commencement of exams slated for March 23 if they so wish.