A Divisional Police Officer, DPO In the Imo State Police command over the weekend engaged a bus driver in a street fight after the latter tried to resist arrest over an alleged crime. 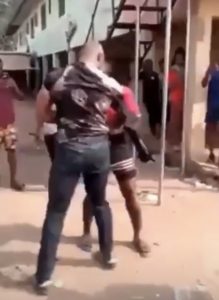 According to eyewitnesses who made videos of the fighting duo, the Divisional Police Officer had demanded for a fine of #7000 but the driver refused to honor it but insisted on paying #5,000.

The disagreement soon degenerated to exchange of fisticuffs and tearing of clothes between them until a team of policemen arrived the scene, firing multiple shots to disperse the crowd while overpowering the driver and dragged him to detention.