A 6th-year Nigerian medical student at the Ternopil State Medical University in Ukraine, recently committed suicide following stress and frustration from the university.

The deceased identified as Badmus Olalade Rafiat reportedly took her life after she was expelled from her school for failing to pass the mock exam ahead of the final semester of Bachelor of Medicine and Bachelor of Surgery (MBBS). 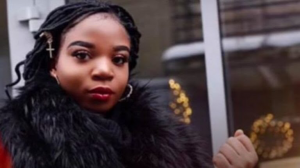 Despite Rafiat’s efforts to transfer to another institution and continue with the MBBS as other students usually do, it is reported that the university kept frustrating her and hence denied her the transcript which was required to ignite the transfer process.

Campus Cam has learned that the student was only given the option of returning to Nigeria, reapply for the student’s visa and start the course afresh. After fruitless pleas, Rafiat reportedly wrote a suicide note and took her life on Thursday, January 16th, 2020. 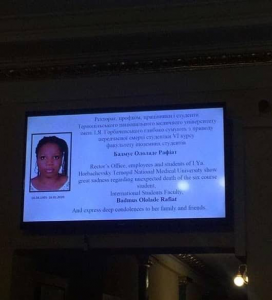 Upon her death, the university administration joined the students’ fraternity and the general Nigerian community in mourning the deceased by putting up a notice bearing her photo on the school’s wall.

They expressed their condolences to her friends and family and asserted that Rafiat killed herself because she was depressed and suicidal.

Rafiat’s friends blame the school authorities and thus have planned a meeting to protest the alleged unfair treatment that caused her to commit suicide.

“Let’s meet in Centre @12 pm,” a notice sent out by Nigerian students in the school read.

Pathetic! Residents Remove Teenager‘s Corpse From Belly Of Python That Swallowed Her (Video)