The Delta State Social Media community was on Monday night thrown into a frenzy when the popular investigative journalist and publisher of SecretReporters, Fejiro Oliver infiltrated the official group of Governor Okowa’s media men and leaked their chats. 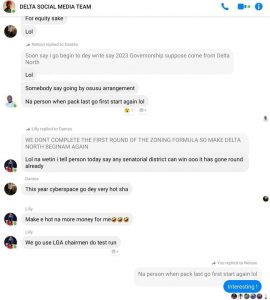 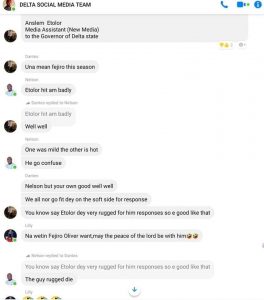 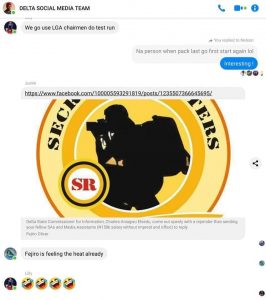 The brouhaha started when Fejiro Oliver through a publication on SecretReporters intimated Governor Okowa on a plot by his men to scuttle the governorship zoning agreement that had held sway in the state.

He noted that the plot was being hatched and orchestrated by the political class held in high esteem and if not checkmated could degenerate to shortchanging Delta Central whose turn it is in the rotational governorship by 2023 which the Governor himself promised during campaigns.

Okowa must come out now to assure the Urhobos and Deltans that he will not be shifting the ancient landmark set by his PDP. He must speak now, not in private to his group of political hooligans or bunch of sycophantic alleluia politicians and friends but to Deltans in a gathering of established political class, where his Deputy will be seated. We cannot continue to be fooled by the titular ‘Ekwueme’ mantra that has since been thrown away when he mounted the saddle of leadership. I can count promises that he has not honored, which may not be his making, as the demands of his job may have made him forget. But the case of who succeeds him should daily be on his mind and the only name that should ring in his ears should be an Urhobo. No more, no less. (read here)


Related Topics:
Up Next